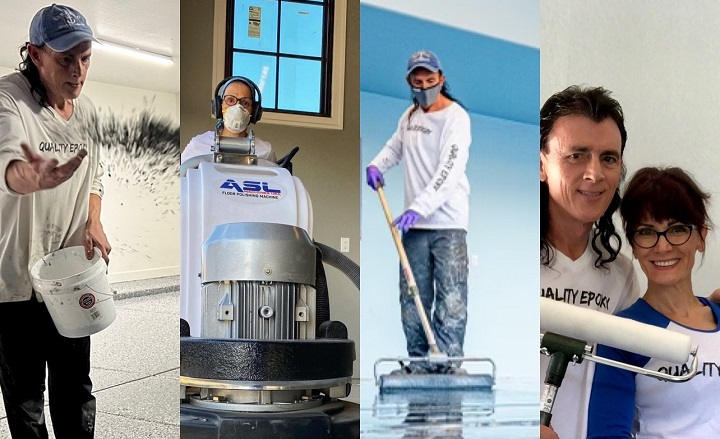 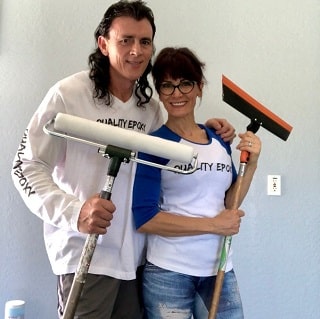 Jon Kopp is the owner and operator of Quality Epoxy. Along with his amazing wife Monica, he has positioned Quality Epoxy as the top Metallic Epoxy company in the state of Arizona, and one of the top in the world. Jon's work is featured regularly in Concrete Decor Magazine and he is recognized worldwide for his stunning, one-of-a-kind, functional floor art.

Raised in Altadena, CA, Jon started his working career at a very young age. His first job was making sure the cabin of his dad's commercial fishing boat in Alaska was always clean. As he got older he became a deck hand for 20 years in the Bering Sea commercial salmon fishing. This was only a summer job so the remaining months he worked at a pet store starting at the age of 12. As he got older he got a job as a ramp agent/supervisor for America West Airlines. After traveling to Phoenix for work, he fell in love with Arizona, decided to relocate in 1989 and he hasn't looked back. 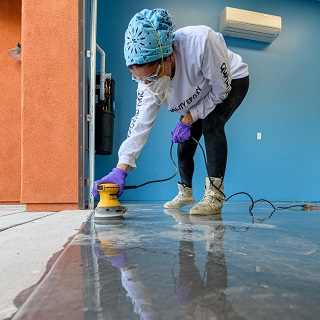 While in AZ, a friend asked him to assist with painting his garage floor. He was using standard house paint for the job. Jon was happy with the job they did but knew they had probably not completed the project to standards. He decided to research how to finish garage floors...the right way.

His friend was interested in partnering wih him at first but ended up backing out. Jon's entrepreneurial spirit pushed him forward, alone. Today he can see how that was probably for the best since he has a very specific way of doing things.

Jon's process and ingenuity has made Quality Epoxy what it is today. Getting started, Jon taught himself how to use the products that were available to him at the time. This meant working with a two-part epoxy system which he purchased at a hardware store. Whereas these products were great for any DIYers, Jon knew he needed to step up his game if he was going to make his company stand out from the rest. That is when he switched over to using Arizona Polymer Flooring products. 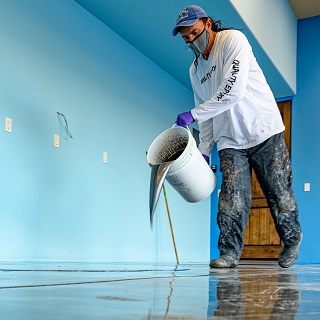 He started off with only solid color flooring but again, knew he wanted to establish himself as a player in the industry. He accomplished this by offering a five-layer system with 5/8" flakes. Industry standard was (and still is) three-layer systems with 1/4" or 1/8" flakes. Ten years later, Jon found himself burnt out and bored with flakes systems. He was ready to sell his business and call it quits.

While searching the Internet one night, he happened to find metallic floor coating. The very sight of them brought him back to life. No one else was doing them in Arizona. Not only was it something unique and creative, it was a tremendous opportunity for Quality Epoxy. 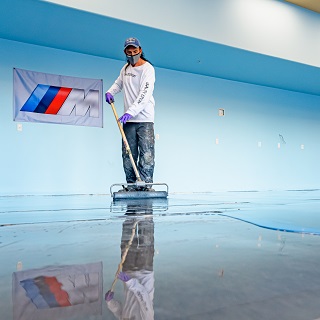 Arizona Polymer Flooring was able to provide Jon with metallic materials not yet on the market. He experimented with mixing colors and using different disbursement methods. He quickly figured out which solvents would create certain effects. And WOW! He truly fell in love with the look of the metallic system. The more he worked with it, the more he understood how to manipulate it to his advantage. He had created a niche for himself. The rest is history.


In 2016, Jon's wife, Monica, left her position as a dental assistant to join Quality Epoxy and create a husband and wife team. It turns out they share the same work ethic and love for the amazing spaces they create for their clients. People really seem to appreciate that they do the work themselves.

People also love their work in general. Quality Epoxy has over a million followers on social media. Photos and videos of Jon and Monica's work have been shared thousands of times.

Back in January of 2021, Jon decided to bring back his polyaspartic flakes floors and solid color polyurethane to his services. This proved to be a perfect decision. 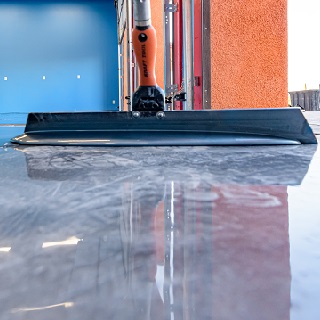 One day, Jon hopes to begin a training program and reveal his secrets. For now, business is great, and he enjoys recognition worldwide, with contractors and homeowners speaking with him regarding his functional floor art.


Jon and Monica hope to achieve a WOW factor with every floor they create, with their level of quality and their attention to detail.